Goal: Design a race car that travels 6 feet as fast as possible, but stops as close to the 6 foot mark as possible

1. The car may go backward. That is it may travel 7 feet forward, then 1 foot backwards. Time is measured from start to initial crossing of the finish line.

4. Measurements will be made from the center front of the car.

5. You should be able to reset the car and race within 1 minute of finishing.

6. No guide rails will be provided, so the car must be able to be lined up and able to travel in a straight line. The track will be next to a wall, so cars that drift to the right will stand a better chance of finishing.

Our group decided to use a 1999 Dodge truck model as the base for our race vehicle. For the most part only the body of the truck and the wheels were used. A custom frame made of plastic I beams and round tube was constructed, with similar tubing used for the axles. A circuit for control of the truck was decided upon that would use and optical transistor to start the truck as well as to reverse the polarity on the motor once the six foot line was crossed. Initially a geared down potentiometer was going to be used to control a reverse circuit that would slowly back the truck up after the six foot line was crossed. However time constraints and difficulty with the potentiometer forced the potentiomer to be used as a set point for starting the truck. The reverse circuit was used as a brake in this instance however the initial swithching did allow for the truck to back up an inch or so. To drive the alignment potentiometer a 2:1 belt drive assembly was taken from an old tape player. Thi was coupled to a 16:1 worm gear assembly from a counter. Together this gave a 32:1 reduction, allowing for the potentiometer to only turn 4/5 of a turn in the 6 foot distance. To control the forward power distance a optical sensor made by Honeywell was used. They were basically light transistors, which consisted of an infared LED and an infared activated transistor, these two were spaced apart in a plastic housing and when the path was free, the sensor provided a signal that turned the motor on, when blocked no signal was present and the polarity of the motor was reversed. To accomplish this a small disk was attached to the potentiometer and it had a small vane that stuck out, this vane would travel around as the truck proceeded down the track, and when it crossed the six foot mark, it would cross the light path and stop the forward motion. The same type of sensor circuit was used to start the truck, with one of these sensors placed in the back where the liscense plate would be, a small plastic piece that hinged on the sensor was help away and the truck would be off, when it was swung down to turn the sensor off, it activated the forward circuit and the truck would begin its race. Two batteries were used. One to power the sensors and switching relays, and the second to power the truck. The body was hinged funny car style onto the frame, with multiple circuit boards attached where space was available to control various aspects of the truck. The first circuit board was the 5 volt power circuit which was located next to the motor above the rear axle. This circuit powered all the sensors and switching relays. The second board was the trasistor switching board. This board is where the signals from the optical sensors came into transistor arrays which turned on and off the switching relays. This board was located on the underside of the bed cover. The third board was located under the hood. This board housed the three relays used to switch the motor. The fourth board was the motor power board located on the frame in the middle of the vehicle. Originally this board had two voltage regulators which were to be set up to control the forward and reverse voltage of the truck. Problems in getting enough current to drive the motor caused us to wire the forward motion as direct from the battery, the reverse circuit was still run through a potentiometer but was not variable as originally intended. A gear box was also constructed out of plastic and various gears to multiply the torque from the motor so that the truck would start smoothly and quickly. Below are pictures of our race vehicle. You should be able to see the control potentiometer which needed to be carefully set so that the motor would reverse just before 6 feet. 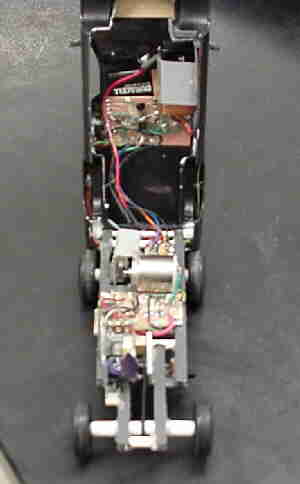 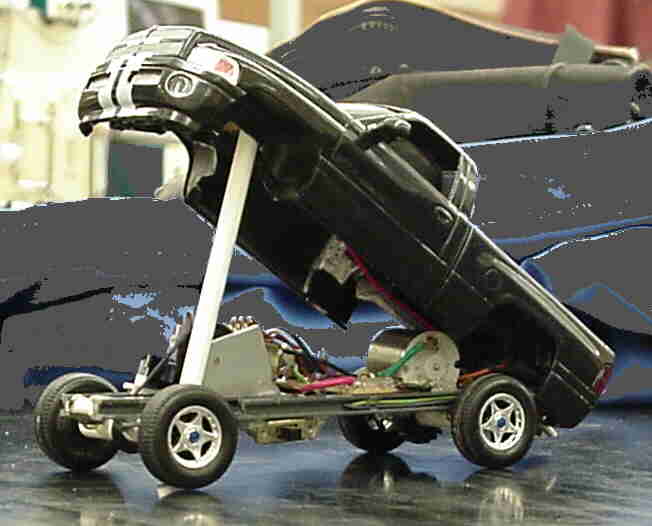 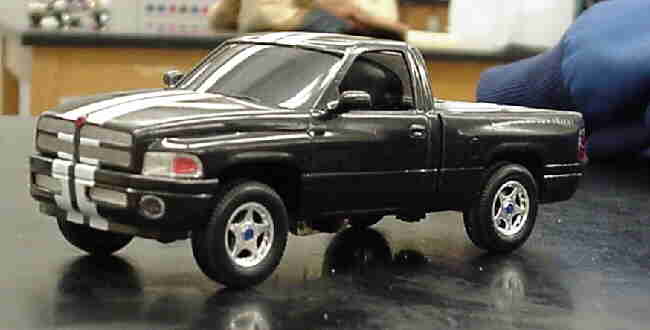 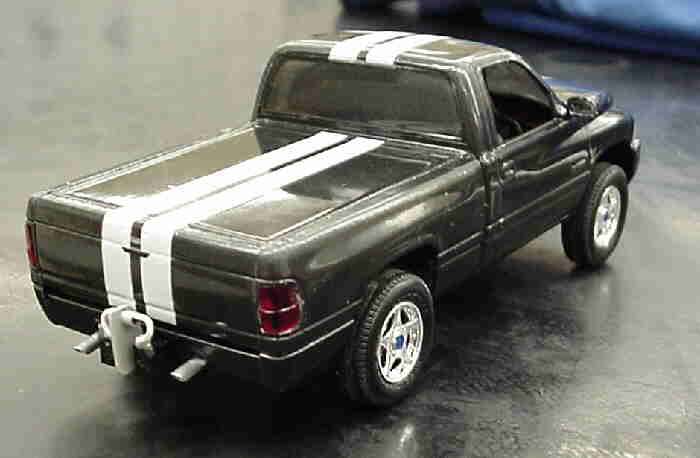 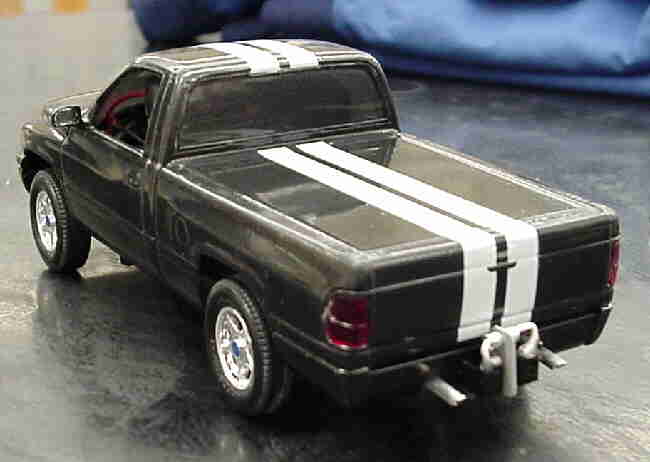 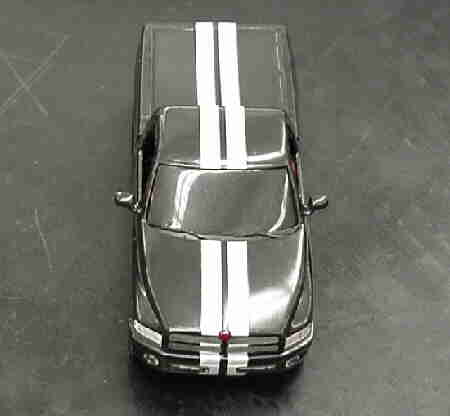 Out of nine cars, we finished 4th, with the top 5 being very close. Our score was 40. The first, second and third cars had 10, 21, and 32 respectively. The last place car had a 256. Of all the cars there I felt ours was one of the only ones who could have consistently finished close to 6 feet on every run. One car was able to get to six feet almost exactly but could not get there again a second time even after trying 5 more times. With a bit more expensive potentiometer up front I am sure we could have been able to get the six foot mark almost exactly. Oh well I guess that is how racing goes :)